One hundred years ago, the "overall movement" was born out of Americans' frustration over the high cost of living. The campaign, which began in Jacksonville, Florida, in March 1920, asked participants to wear inexpensive overalls until the prices of clothing dropped to more reasonable levels. 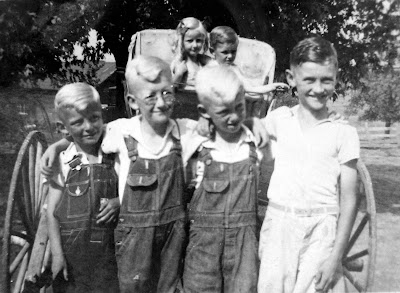 Word of the overall movement spread across the country and reached Cuba City by mid-April, though it is unclear if it ever took hold beyond a passionate group of high school students. The founding of Cuba City's "Overall Brigade," so named by local newspaper editor Herman Goldthorpe, is described below:

"Tuesday night after school the High School boys met to consider the overall movement, which has been a great feature in the larger cities to help reduce the high cost of clothing. Nearly every boy present pledged himself to wear overalls to school for the remainder of the term. Wednesday morning, a great majority of the boys appeared in overalls and those who didn't said they would wear them Thursday. Even Prof. Ralph promises to be with us Thursday. It not only makes the boy feel more at ease dressed in a comfortable overall instead of a tight miserable suit, but makes a $2.75 to $3.00 suit take the place of a $40 or $50 suit and serves the purpose much better." --Cuba City News-Herald (April 23, 1920).