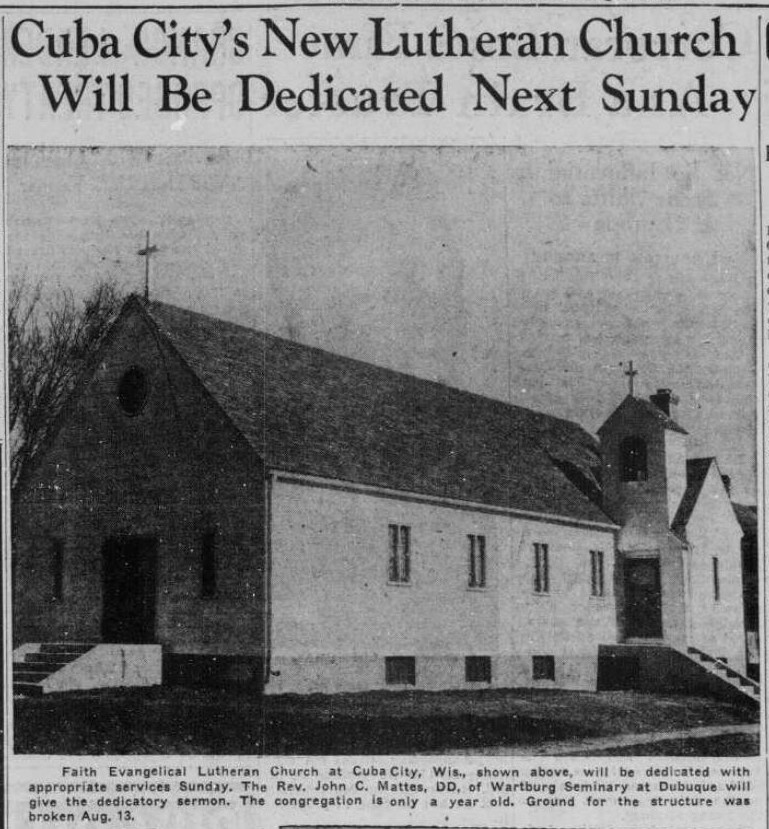 The congregation has its roots in 19th-century Louisburg, where a small group of Lutherans worshipped at St. Michael's, a church built by early German settlers.

Services were moved to Cuba City on Sunday, November 27, 1938, and on January 20, 1939, the congregation incorporated as the Faith Evangelical Lutheran Church. The Reverend J. J. Lippoldt was invited to serve the newly organized congregation. 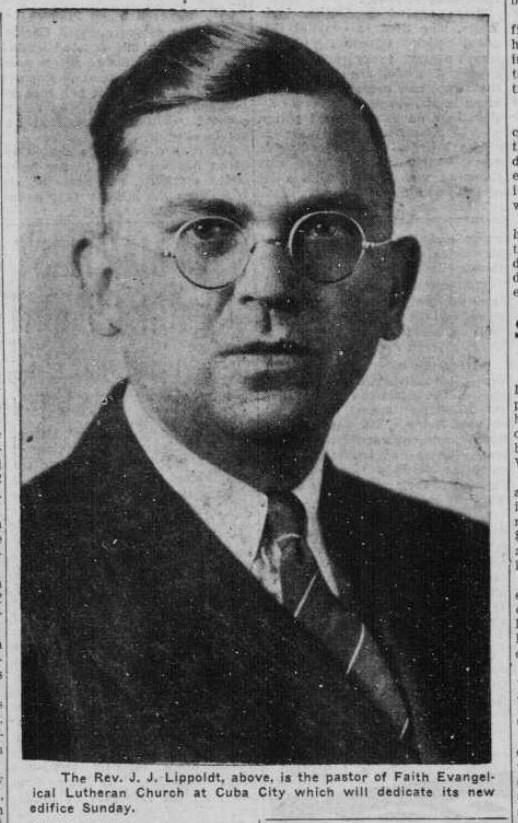 After months of holding services in meeting rooms above Main Street businesses, Cuba City Lutherans were eager to have their own place of worship. A building committee was formed on February 26, 1939 with the following members: Norman Ebert, James Egan, Willard McClain, Clifford McReynolds, William Pickel, W. G. Wimmer, and the Rev. J. J. Lippoldt.

Faith Lutheran church would be built across from Veterans Memorial Park on the site of Cuba City's first religious structure: the Free Methodist Church. On August 13, 1939, a groundbreaking ceremony was held, and two weeks later, a cornerstone was laid. The Telegraph Herald reported that the cornerstone contained "copies of the Bible, Lutheran Standard, Telegraph Herald and Cuba City News-Herald, and lists of officers and members of the congregation."

The church was completed in less than three months. Jones Brothers of Cuba City were the contractors for the project, but many parishioners donated their time to speed up the building process and cut down on costs. The Wisconsin State Journal reported that "the men of the congregation gathered at the site across from the city park, and held an old-time 'bee.' Equipped with three tractors and as many scrapers, the group excavated the entire basement. At the end of the second day they almost had finished pouring the concrete for the foundation footings. More than 350 cubic yards of dirt had been removed."

Dubuque architect C. I. Krajewski designed the new church, which the Faith Lutheran dedication program described as "a small chapel of the English type." As with most construction budgets, sacrifices had to be made to keep costs manageable. Instead of brick, the church was frame, and the length of the building was reduced by six feet. The final structure was 24 by 62 feet, with a seating capacity of 160. In a nod to the past, the bell from St. Michael's church in Louisburg was placed in the bell tower. According to the Telegraph Herald, the church was built at a cost of $9,000.

On November 19, 1919, an opening service and a dedicatory service kicked off two weeks of events to celebrate the new place of worship. A program was created for the dedication ceremony that contains a church history, a description of the new facility, a list of charter members of the congregation, photographs, and advertisements from area businesses. To view the entire dedication program: