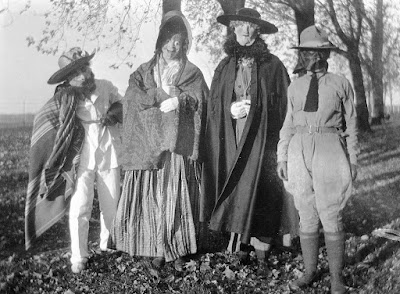 Photo credit: "Halloween Costumes 1918" by Richard is licensed under CC by 2.0

Halloween mischief was afoot in Cuba City one hundred years ago. According to Justice of the Peace (and former barber) Albert B. Andrew, several girls were responsible for terrorizing the village with "tick tacks," a prank common around Halloween. Tick tacks were some sort of noisemaker, often wooden spools and nails, attached to a window to create a tapping noise. Andrew published the following threat in the local newspaper:


"Mothers, it may be your daughter. Ask them. They may be truthful. I have the names of seven of them who have been making the rounds of late, putting "tick tacks" on the windows. One lady was quite seriously scared. Her husband has entered a complaint to me. Do you want your young daughters brought into court? You had better look after them or the authorities will. If you look up our city ordinance for the preservation of the peace and good order (Sec. 1) you will note that violating the above ordinance shall forfeit and pay to the said village not less than $5.00, nor more than $50.00, together with cost of prosecution.  A. B. ANDREW"  --Cuba City News-Herald (October 24, 1919).