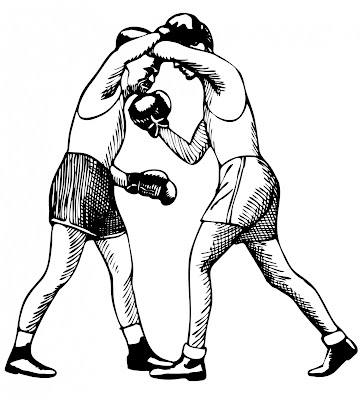 On this day in 1914, Cuba City's heavyweight boxing star Stanley Klosky attempted to prove himself in a come-back match against his former opponent Art Nelson, "the fighting woodchopper" of Sparta. The match opened the fall boxing season of the Wisconsin Athletic Club and took place at Acme Hall in Platteville.

Stanley Klosky, also referred to as the "fighting miner," worked in Cuba City-area mines when he wasn't in the boxing ring. In the spring of 1914, 27-year-old Klosky weighed in at 198 pounds, stood 6 feet 2 inches, and had a reach of 79 inches.

No photographs have been located of Klosky, so we must rely on written descriptions for clues about his appearance. A Dubuque newspaper noted that "the big miner has a pair of hands that precludes the possibility of anybody ever taking him for a jeweler." The same article mentioned that "Klosky is no Adonis that's true and he is not very long on conversation" (Dubuque Daily Times-Journal, May 24, 1914).

Looks and personality aside, Stanley Klosky drew the attention of the tri-state area, and beyond, in his early boxing career. Large crowds flocked to watch the heavyweight pummel one opponent after another, and his matches were mentioned in newspapers all over the country.

In the beginning, Klosky was far from a professionally trained boxer. The general consensus was that his incredible strength and size, rather than skill, led to his early successes in the ring. By the spring of 1914, however, he had a high-quality training facility and was working with Chicago trainer Cleve Hawkins.

Going undefeated in the winter and spring of 1914, the Cuba City miner knocked out all of his opponents until his disappointing tangle with Art Nelson in June, when Klosky shocked spectators by throwing in the towel halfway through the match.

Did Stanley Klosky redeem himself in the September 1914 come-back match against Art Nelson? While there were no knockouts in the fight, Klosky was victor of all but the last two rounds, winning the popular decision. The "fighting miner" would go on to compete through the summer of 1915, but his name vanishes from the sports pages after that time.