Fifty years ago, as the United States was celebrating the Apollo 11 space flight, this photograph representing two local aviation enthusiasts was printed in newspapers across the country. 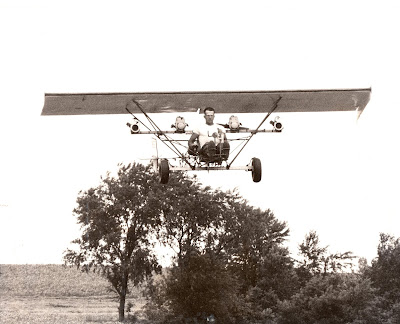 Cuba City, Wisc.: While the Apollo 11 astronauts were flying to the moon, the Weber brothers of Cuba City were making a landmark flight of their own. Verdon Weber flies his four-engine airplane, "The Weber Dream," just above a clump of trees, at a hayfield airstrip near here. The engines of the homemade plane are four go-kart motors, totaling 35 horsepower. Weber and his twin brother, Vernon, a duo that is similar to the immortal Wright Brothers, built the 250-pound, 55-mile-an-hour aircraft out of metal tubing and fiberglass. They were granted a Federal Aviation Administration license but must stay close to home for the first 75 hours of flying time.