On this day one hundred years ago, Cuba City was visited by two comic strip characters, come to life--Buster Brown and Tige. 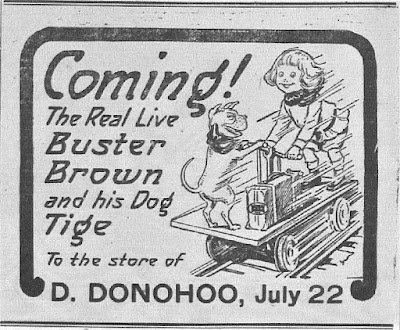 The Buster Brown character, created by Richard F. Outcault in 1902, was a mischievous schoolboy with a talking pet dog, Tige. The Brown Shoe Company used the comic strip to advertise its products, hiring little people to play the role of Buster Brown and sending them all over the country with canine sidekicks.

The local newspaper had this to say about Buster Brown's 1919 appearance:


Buster Brown and his dog, Tige, were at the Dillon Donohoo emporium Tuesday. During the forenoon, he took an auto ride around the city announcing the exhibition at 2:30 p.m. Promptly at 2:30 he and Tige began their program, which attracted a great many children and adults as well and concluded by distributing souvenirs. Buster Brown and Tige are sent out by the Brown Shoe Co., of St. Louis, to advertise Buster Brown shoes for Girls and Boys. -- Cuba City News-Herald (July 25, 1919).

This was not Cuba City's first visit by the comic strip duo. As seen in the image below, Buster Brown and Tige performed at the Donohoo and Jacobi store sometime between 1911 and 1916. 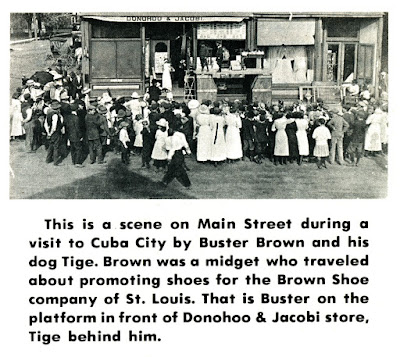