Cuba City was just twelve years old when Fisher N. Palmer opened what may have been the first hardware store in the village. Palmer started the enterprise with William Richards in 1887, but partnered with J. E. McBride in the fall of 1889. 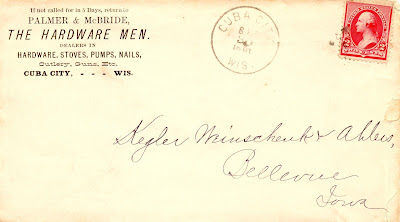 The Galena Daily Gazette from November 6, 1889 had this to say about the Palmer & McBride shop:


J. E. McBride, eldest son of Hon. Robert McBride, of Elk Grove, has gone into partnership with Fisher Palmer in the hardware business at Cuba City. Mr. McBride was formerly connected with a newspaper at Newton, Kansas, and is a young man of fine ability and good standing. Mr. Palmer has been in the hardware business at Cuba City for some time, and has been successful. The new firm will be Palmer & McBride. They put in a large and complete stock of hardware, tinware, stoves, ranges, and articles usually kept in a first class hardware store. Both gentlemen have a large circle of friends as well as business tact, and they will not fail to make a success in this growing young place.

As predicted, Palmer & McBride did well in the bustling little village. They expanded into the coal business in 1889 and added a two-story, 30 by 40 foot addition to the back of their shop in 1891. The store also served as the town's telephone office beginning in 1890.

Despite their success in Cuba City, the ambitious duo moved to Freeport, Illinois, in 1892. Fortunately, this envelope survives as proof of a very early Cuba City business.