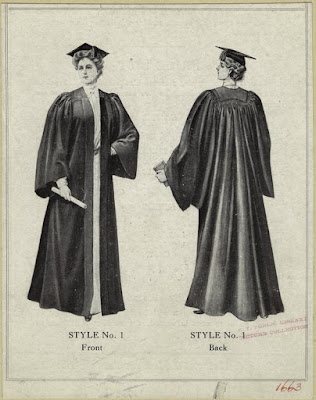 The 1919 commencement exercises were held at the High School Auditorium on Friday morning. The members of the graduating class presented an inspiring sight as they marched to their positions.

The first number on the program was a song, which was followed by a reading ably rendered by Miss Llora McGee.

The valedictory by Miss Esther Harris was cleverly arranged and creditably presented.

Miss Lucille Hogan then sang a vocal solo in her usual pleasing manner.

The class prophecy was composed and delivered by Miss Ruby Winn and if her predictions come true there will be "something doing" by the nineteen-nineteeners.

Then followed the address by Asa M. Royce, President of the Platteville Normal. Mr. Royce had a message of vital import and interestingly presented it. This was followed by a vocal solo by Mrs. P. E. Ralph which was a delight to all.

The presentation of diplomas was made by Thos. Willey, President of the Board of Education, in a few well-chosen remarks.

The Juniors were on the job, too, and brightened the occasion by the beautiful decorations and the presentation of a charming bouquet of Lilies of the Valley, the class flower, to each member of the graduating class.

The graduates were as follows: