Cuba City's public library opened its doors in 1926 in the town's first city hall building, which stood on Clay Street, where American Bank is today. To celebrate National Library Week, we have a history of the first fifty years of the library in Cuba City, written for the town's centennial in 1975. 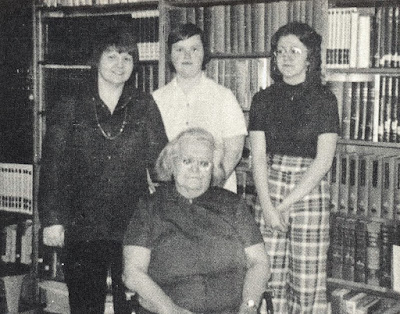 In the first fifty years of the town's existence there was no such a thing as a free supply of books available to all; there was no public library here. In the schools, text books were rented to pupils and a scarce few reference books were bought. Not until the early 20s were some books for general reading bought for the High School library. They were not lent out for reading at home but were intended to be consumed on the premises.

Growing affluence with the growth of the town after the turn of the century led to the buying of books, mostly for children, by some families. Certain boys acquired sizeable libraries of Alger, Henty, Rover Boys and such books in a day when you could buy an Alger for 10 cents, and with a hard cover too. Fifty cents would buy a well bound book then. Those boys books got thorough circulation in the little town where everybody knew everybody else.

Without radio, movies, automobiles or TV, boys and girls found books far more attractive than they seem to today. The paper bound "penny dreadfuls" were appearing here before 1910 and into World War I times. At that time they were 5 cents plus 1 cent war tax, and they had a brisk clandestine circulation among the small fry. They were the forerunners of today's comic books though the illustrations were mostly confined to the covers which were lurid. They had to be read, of course. Just looking at the covers got you nowhere. It was probably the lurid covers that led some mothers to ban them and bring about the underground circulation.

Cuba City was ready for a library when, in 1925, the Cuba City Woman's Club was founded. An item in the 1943 Anniversary edition of the News-Herald says, "Our library was started by a group of Camp Fire Girls under the leadership of Mrs. Dwight Stephens. Girls began gathering books for a library nucleus, but the undertaking became so much greater than planned that another volunteer group, the Woman's Club entered into the work. They had been considering ways and means to remedy the lack of library facilities."

The club then began in earnest its efforts to start a library. They called on Mrs. Carrie Nicholas, the Platteville City Librarian to come and speak to them on how to go about the project. Then they asked for contributions of books from anyone who cared to donate and succeeded in collecting a considerable stock.

In February of 1926, the club members went before the City Council and asked the board to give it the use of the room in the southeast corner of the old city hall. They also asked that light and heat be furnished and that the sum of $300 be appropriated for the project. They told the board that the club members would operate the library, each member acting as librarian in turn until such a time as it became well established and financially able to pay a librarian.

The board agreed to this and appropriated the money in addition to granting the other requests. The club members then set about cleaning, mending, rebinding and cataloguing the books that had been contributed. That, along with cleaning and decorating the room took three months of strenuous work. The library was finally opened on May 1, 1926. After the initial appropriation of $300, the city council later increased the amount to $400 and by 1943 was contributing $500 a year.

Once established, the library began receiving regular shipments of books from the Travelling library in Madison, which augmented its supply. By careful expenditure of its small appropriation, gifts of books and through annual benefits by the Woman's Club, the stock was gradually built up. The Woman's Club itself, the Camp Fire Girls, and the American Legion Auxiliary helped with cash contributions at the time of the opening.

Members of the Woman's Club took their turns as librarians until February 1928, when Mrs. Walter Millhouse agreed to act as librarian for $50 a year. This was increased to $100 the next year. For this stipend, she kept the library open on Wednesday and Saturday nights. In 1931, Mrs. Millhouse's salary was raised to $150 and the library was opened on Monday afternoons as well as the two nights. Mrs. Millhouse served as librarian until 1939 when she and her husband moved away.

Mrs. D.S. Stephens served for a year or so, then Mrs. Robert Nelson acted until 1947 when Miss Mina Shepherd took over. She served until 1957 when the present librarian Grace Cook was appointed.

The organizers of the Woman's Club and thus charter members were: Mrs. Robert Copeland, Mrs. Arch Gibson, Mrs. S.E. Smalley, Mrs. Robert Fox, Mrs. Curt M. Treat, Mrs. Dillon Donohoo, Mrs. John Ralph and Miss Ida Miller. Mrs. W.G. Wimmer, Sr., Mrs. Harry Peacock, Mrs. Charles Eustice, Mrs. Francis Faherty, Mrs. Dwight S. Stephens, Mrs. Joseph Longbotham and Mrs. Clyde Trewartha joined the club shortly afterward and participated in all the hard work that went into starting the library. These were the founders of our present library and no individual or group could have a finer memorial than an institution which continues giving service and pleasure to all through the years. Of the founders, Mrs. Arch Gibson was singled out by the women themselves as deserving of special praise for her hard work and dedication in furthering the project.

The Cuba City Library is now a member institution of the five county cooperative system which provides practically unlimited library service to this part of the state. From an initial appropriation of $300 a year, the City now [in 1975] provides $12,100 a year for its support.
Email Post
Labels: Cuba City Cuba City Public Library Libraries