St. Patrick's Day 1936 brought a new business to Cuba City: the Don Rue Tavern. The establishment was run by Bill Nelson and Byron Goldthorpe and was located on Main Street, where Junque Stops Here is today, next to Nick's Cafe. 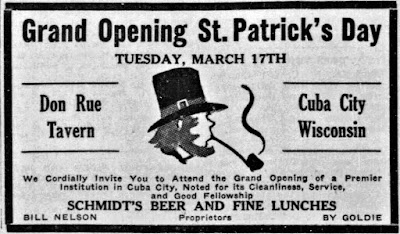 The Cuba City News-Herald had this to say about the new tavern:

"The room has been newly painted and decorated and most of the fixtures, which are all new, were installed yesterday. The bar and back bar present a beautiful appearance in its three-tone effect, with hidden colored lights." (February 20, 1936)

"Observers maintain that this is one of the best and most modern taverns in this section of the state. The furniture and fixtures are far above average and the accommodations for the ladies are inviting." (March 12, 1936)

This building was formerly occupied by the Brewer Brothers clothing store, which moved to its new location on the corner of Main and Clay Streets in the early 1930s. The Gamble Store opened in this space in 1943.
Email Post
Labels: 1930s 1936 advertisements bars businesses holidays