During the Great Depression, confidence in financial institutions plummeted, and scenes of worried people waiting outside banks to withdraw their savings were common. How did Cuba City weather the storm?

The Cuba City State Bank was the only financial institution in town at this time, having just bought out and moved into the home of its competitor, the First National Bank, in 1928. 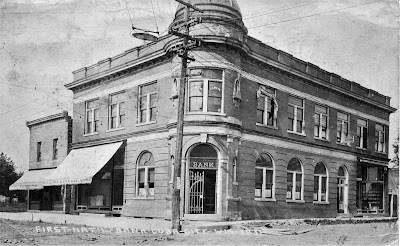 Image from a postcard postmarked 1915.

Though it appears that no dramatic runs on the bank occurred during the Depression years, there were still some anxious moments.

On July 23, 1932, a rumor spread that the Cuba City State Bank was closing its doors. The following article was published in the Dubuque Telegraph Herald on July 26:

Rumors that the Cuba City State bank had closed its doors Saturday afternoon spread rapidly throughout Grant county. There was much anxiety aroused as a result of these rumors which were entirely dispelled when the bank resumed business Monday morning.

The Cuba City State bank, regarded as one of the strongest banks in Grant county, called in Deputy Banking Commissioner W. H. Doyle of Platteville late Saturday afternoon for a conference which may have given rise to the carelessly broadcasted report the bank was in straits but the rapid handling of the situation for the best interests of depositors and stockholders prevented any undue developments and Monday the bank was open and doing business without any apparent reason for the unwarranted reports carelessly spread about.

Cuba City business men, depositors and stockholders were considerably wrought up because some persons had handled the truth carelessly and there was fine spirit shown on their part in coming to the rescue of their bank. The bank will continue to do business as its finances are in sound condition.


These jitters were a sign of things to come. In March 1933, a banking crisis swept the nation as panicked people rushed to make withdrawals in such high volume that banks were unable to accommodate them.

Wisconsin joined the rest of the country in ordering a bank holiday, requiring all financial institutions to close. At the same time, newly inaugurated president Franklin Roosevelt declared a national bank holiday and the Emergency Banking Act was passed, setting standards for banks to reopen.

The Cuba City State Bank fared better than many and was one of the first Wisconsin banks allowed to open its doors on Tuesday, March 14. According to a March 15 article in the Telegraph Herald, the state commissioner of banking permitted the institution "to open on an unrestricted basis," which indicated that the bank was "100 per cent sound."
Email Post
Labels: 1930s 1932 1933 banks Cuba City Cuba City State Bank Great Depression