Many of us have football on the brain today, so why not take a look at Cuba City's first high school football team. 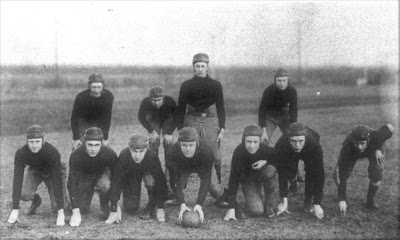 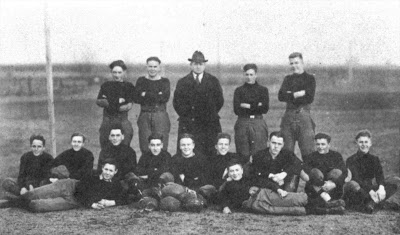 Cuba City businessman Frank C. Florine organized the group in September 1920 and served as its coach. The local newspaper had this to say about the fledgling team:


The high school boys have been assured of funds for the initial expenses and already have their suits. About 20 of the young huskies have been reporting to practice. Much enthusiasm is manifest and from present appearances it looks like we will have a winning team.  --Cuba City News-Herald (September 24, 1920)

Cuba City's centennial history tells a slightly different tale, allowing that the school board purchased 15 pairs of pants, 11 head gears, and 11 pairs of shoulder pads. The team of 15 or 16 young men had to provide their own jerseys, shoes, and socks.

The history declared the team's first season a respectable one, with two wins over Belmont, one win over Stockton, and a loss to Galena, though a newspaper article from the time claimed that Stockton was victorious in this first match-up.

**Photos and captions are courtesy of Cuba City's centennial history.