Considering its rural setting, it is no surprise that Cuba City has been home to several farm implement dealers throughout the years. Charles F. Vieth, "The Implement Man," as he is described in the advertisement below, opened his shop on March 1, 1918. 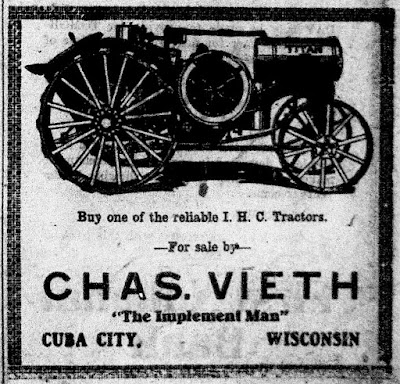 Vieth published the following in the local newspaper to announce his arrival:


I desire to announce to the public that I have purchased the Farm Implement business formerly conducted by Mr. J. B. Wagner and will continue the same at the old stand across Main Street from the depot. I will handle all kinds of Reliable Machinery, Farm Implements, Cream Separators, Gasoline Engines, Etc., and a full line of repairs of all kinds. Will be ready for business March 1. Your patronage solicited on the basis of reliable merchandise at the right price, and an experience of 13 years in the business. --CHAS. VIETH. (Cuba City News-Herald, February 22, 1918) 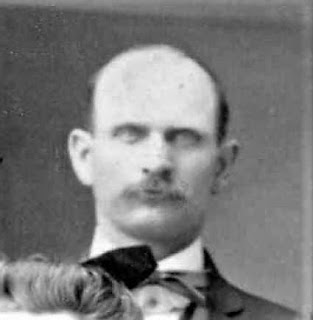 This photograph of Charles Vieth was discovered thanks to a relative on Ancestry.com. It is also available courtesy of the Monroe County History Room.

As Vieth mentioned, he was no stranger to this line of work. He and his brother had operated an implement business in their hometown of Norwalk, Wisconsin, for many years by the time he arrived in Cuba City. 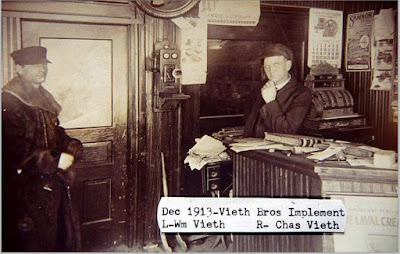 Charles Vieth stands behind the counter of his implement business in Norwalk, Wisconsin. This photograph was discovered thanks to a relative on Ancestry.com. It is also available courtesy of the Norwalk Public Library.

Directories and census records suggest that Charles Vieth continued to be involved with the Norwalk operation throughout his time in Cuba City. He had a system in place if he needed to be gone for extended periods of time, as evidenced by this announcement in the local paper:

Chas. Vieth, our popular farm implement dealer, has gone to Norwalk, Wis., for a few weeks visit. During his absence, the keys will be left at the Udelhofen barber shop in case any patrons desire anything. (Cuba City News-Herald, November 29, 1918)

Business must have been going well, because one year after setting up shop in Cuba City, he traded "the old stand," which was probably in the vicinity of the Kwik Trip parking lot, for a sturdier structure. By February 28, 1919, Charles Vieth's implement dealership had changed locations, possibly occupying the building that is now home to Tin Lantern Antiques. 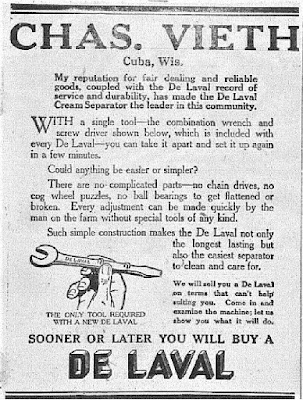 By March 1921, the business had expanded:

Charles Vieth recently completed the erection of a machinery storage and sales room, 48 by 50 feet, at the rear of his Main Street property and is now ready for the big spring drive soon to be made by neighborhood farmers. (Cuba City News-Herald, March 18, 1921)

At some point in the 1920s, Vieth left Cuba City and returned to Norwalk. He switched from selling farm implements to automobiles and, in his later years, he and his wife, Amanda, ran a nursing home out of their home. Charles Vieth died in 1953.