For those participating in No-Shave November, this image of early Cuba City resident James Nicholas might provide some inspiration. 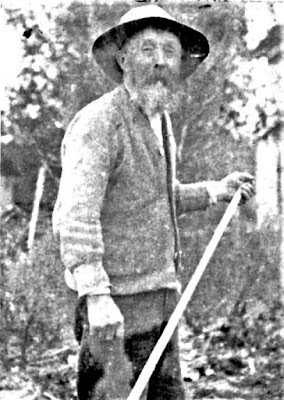 James Nicholas arrived with his parents and siblings in the 1840s, making them some of the earliest European settlers in the Cuba City area. They farmed just southeast of town, near present-day Wiederholt Enterprises and Cole Acres Golf Course.

The Nicholas family originated in Cornwall, but James was born near Cleveland, Ohio, before his parents settled in Wisconsin.

James Nicholas was a Civil War veteran, though his service was brief. He enlisted in the 96th Illinois Infantry in March 1865, one month before General Lee surrendered at Appomattox. Private Nicholas spent time in Tennessee and Texas, after transferring to the 21st Illinois Infantry, and was discharged from the Army in December 1865. Military records provide fun details about James Nicholas, such as his height (5'7"), eye color (blue), and hair color (red).

Nicholas was married twice and had six children. He spent most of his life farming but by 1900, he had moved from the farm to Cuba City and was living with his wife and youngest son, Elmer, in the Clemens Street area. He died in 1906, aged 66, and is buried at Mount Pleasant Cemetery.