At first glance, nothing seems amiss about this issue of the Cuba City News-Herald announcing the end of World War I, one hundred years ago. 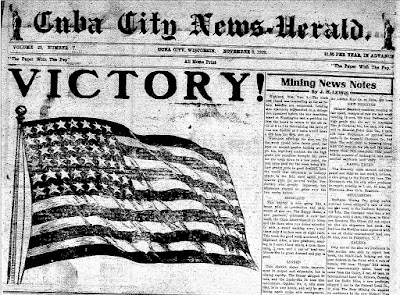 But take a look at this newspaper's date: November 8, 1918. This is evidence of the "False Armistice," when inaccurate reports of the war's end spread like wildfire across the United States, days before Germany officially surrendered.

The nation was thrown into a frenzy of celebration, and Cuba City was no different. The News-Herald reported "the ringing of bells and the blowing of whistles," followed by a parade led by the remaining members of the Cuba City Military Band (nearly half of the band members were serving overseas). The procession traversed the city and stopped on Main Street, where revelers listened to patriotic speeches.

It's not clear at what point Cuba City residents learned that their celebrations were premature. The next edition of the newspaper, published on November 15, 1918, described a second round of celebrations that occurred when the true armistice was announced. The news reached Cuba City at around 4:30 a.m. on Monday, November 11. Leery of another false celebration, officials waited for a telegraph confirmation from Baraboo before spreading the word.

"Whistles were blown, bells were rung and citizens generally jumped out of their cozy beds to make merry over the joyous news." Another parade was formed and, after processing through the streets of Cuba City, revelers headed toward the government sulfuric acid plant southeast of town, where they met a celebrating crowd from Benton. The merrymakers returned to Cuba City and then on to Benton and Hazel Green, accompanied by the Benton Band and the Cuba City Military Band.

Speakers of the day included "W. R. Buchan, Dr. Kenny and Rev. Sainty, of Benton; Father Miller of Hazel Green and Father W. A. Banfield of Bankston, and Hon. S. E. Smalley of this city."

The epic day of celebration ended in Cuba City with a free dance at the Auditorium, compliments of the Loeffelholz Bros.
Email Post
Labels: 1910s 1918 celebrations Cuba City parade wars World War I