One hundred years ago, Cuba City was in the midst of a health scare as infantile paralysis, better known today as polio, affected surrounding communities. 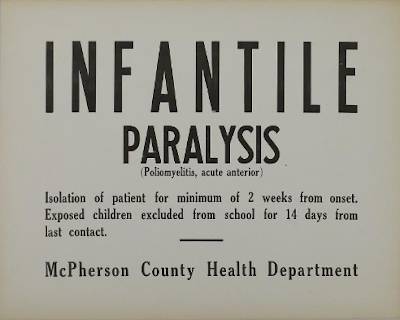 On August 1, 1918, a quarantine went into place in Cuba City. The quarantine order below was published in the Cuba City News Herald:


The Board of Health for the village of Cuba City hereby makes the following rules governing the quarantine for infantile paralysis:

1. No children under 16 years of age shall leave the village bound for Dubuque, Galena, New Diggings or any other point where this disease prevails.

2.  No person under 16 years of age shall be allowed to come to the village of Cuba City from a place where infantile paralysis exists.

3. In event of any case or cases of infantile paralysis being found within the village limits the following rule will and shall become automatically and immediately effective: All children under 16 shall remain on their own premises.

4. The release of quarantine of any district will automatically release these rules in reference to that particular district.

5. Anyone violating these rules will be completely quarantined. These rules go into effect August 1, 1918.

Signed by Board of Health:

One month later, a case of polio was discovered at the James Eddy home in Cuba City and, though it was considered a mild case, schools were closed and anyone under sixteen had to remain in their own homes.

The quarantine was lifted on September 23, and the schools reopened.