What movies were Cuba City residents watching one hundred years ago?

Thanks to the film industry publication, Motography, it's possible to find out. Motography had a section called "What the Picture Did For Me," where theater owners commented on films and how they were received in their town. The reviews were meant to help other theater owners decide which films to select.

Cuba City's "theater" operators at the time--Charles and George Loeffelholz--were frequent contributors of movie reviews.  The Loeffelholz Brothers operated the Auditorium entertainment venue above their Ford garage ca 1916-1924. The building still stands on Main Street, across from City Hall. 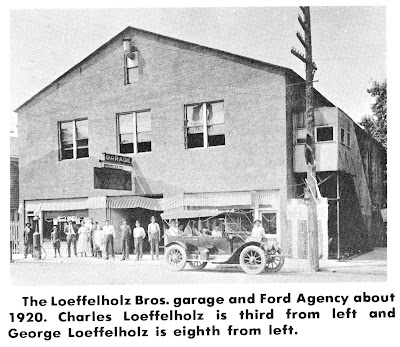 The following films played at Cuba City's Auditorium and were reviewed by the Loeffelholz Bros. in the March 23-June 29, 1918 issues of Motography:

The Price of Silence, with Dorothy Phillips -- "A fine picture. You can get the crowds with this."

The Slacker, with Emily Stevens -- "This picture broke all records. You cannot get another picture to beat it. Boost it big."

The Heart of Nora Flynn, with Marie Doro -- "A good picture. Film in good condition."

The Call of the Cumberlands, with Dustin Farnum -- "A good picture. This kind draws well."

Pudd'nhead Wilson, with Theodore Roberts -- "It's a great picture. A southern story, and it draws well."

Souls Triumphant, with Wilfred Lucas and Lillian Gish -- "If you book this picture, you can't go wrong. If you want good pictures, book Triangle features."

Sweetheart of the Doomed, with Louise Glaum -- "A splendid picture. Star excellent. This is Miss Glaum's very best."

The Desert Man, with W. S. Hart -- "It's a whirlwind. Book any of the Triangle Hart pictures and you can get the people into your theatre."

The Little American, with Mary Pickford -- "The best Pickford picture we ever received."

Helene of the North, with Marguerite Clark -- "Although an old release, this picture is a good one."

Flame of the Yukon, with Dorothy Dalton -- "This is much better than The Spoilers. There is a real fight in it, too."

Time Lock and Diamonds, with William Desmond -- "A fine picture."

Wolf Lowry, with W. S. Hart -- "This is a good picture but not so good as other Hart releases."

The Bad Boy, with Robert Harron -- "A picture that every father, mother, son and daughter should see."

American, That's All, with Jack Devereaux -- "Full of mirth and pep."

The Clodhopper, with Charles Ray -- "A good picture, full of comedy."

In Again, Out Again, with Douglas Fairbanks -- "It's great, chuck full of comedy."

Pride of the Clan, with Mary Pickford -- "The poorest Pickford picture we have received."

Destiny, or the Soul of a Woman, with Emily Stevens -- "A good picture. Good print."

The Food Gamblers, with Wilfred Lucas -- "A good picture, patriotic."

Borrowed Plumage, with Bessie Barriscale -- "Play O. K. but these costume pictures do not take."

Sudden Jim, with Charles Ray -- "A fine production. Ray has a chance to show his skill."

Wild and Woolly, with Douglas Fairbanks -- "A good picture and it drew a big crowd. Everybody pleased."

Snow White, with Marguerite Clark -- "A good children's play but does not please the older folks."

Master of His Home, with William Desmond -- "A good gold mining story. Triangle surely have the best of pictures."

Madame Bo-Peep, with Seena Owen -- "A fine feature. Scenes laid in the east and out west."

The Americano, with Douglas Fairbanks -- "The best of Fairbanks' Triangle pictures. Drew a good crowd."

Back of the Man, with Dorothy Dalton -- "A good moral play."

Princess of the Dark, with Enid Bennett -- "The poorest of Miss Bennett's features."

The Square Deal Man, with W. S. Hart -- "A fine western feature. It pleased best of any of Hart's Triangle pictures."

The Iced Bullet, with William Desmond -- "A good mystery picture."

The Girl Glory, with Enid Bennett -- "A good picture. If you want good crowds, use Triangle features."

The Spirit of the Red Cross -- "The best picture of its kind we have shown. Two reels are not enough for a picture like this."

The Dumb Girl of Portici, with Pavlova -- "Look out for this. It's very poor."

The Little Yank, with Dorothy Gish -- "A picture of the Civil War. Pleased well."

They're Off, with Enid Bennett -- "A good race track story. It's a pleasing picture."

The Gun Fighter, with W. S. Hart -- "Not as good as Hell's Hinges and former pictures."

Civilization -- "A good picture but we would rather have a picture like The Slacker.

Luke's Lively Life, with Lonesome Luke -- "The best comedy we have received for a long time."

The Fighting Trail,  with William Duncan -- "The best serial we ever ran. We have run episodes one, two, and three, but we can judge from this what kind of picture it is."