The Tyler House was a stage coach stop located between Cuba City and Hazel Green on what is now Highway 80.  The nineteenth-century hotel was built by Augustus Tyler and is owned today by Dave and Lois Kuhle. 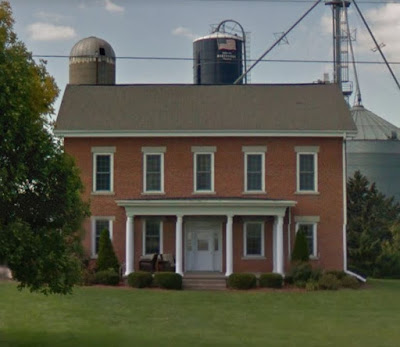 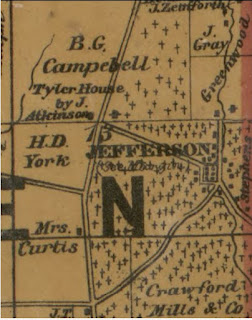 The Tyler House is visible in this 1868 "New Map of Grant County," made available by the Library of Congress, Geography and Map Division.

Augustus and Elizabeth Tyler were from New York State, and they settled in the Hazel Green area in 1846. According to census and newspaper records, Augustus Tyler was a lumberman, farmer, and hotel keeper. Tyler built what a Platteville Witness article called “a fine, large brick hotel” where the stage coach would stop and change horses between Platteville and Galena. The value of his land was an impressive $11,000 in 1860. That would be around $300,000 today. 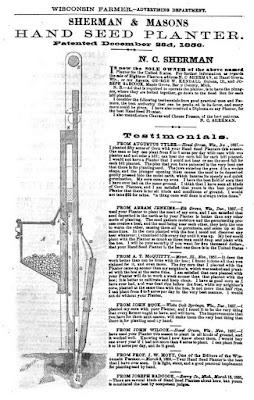 Advertisement from The Wisconsin Farmer, and Northwestern Cultivator, 1858. This ad includes a testimonial from the Tyler House's owner, Augustus Tyler.

In addition to being rich farmland, it seems that the Tyler property was also rich in lead. Augustus Tyler reportedly discovered the deposits when he was digging a well soon after settling at his home, but he waited until several years later to investigate. Initial newspaper reports in February 1866 indicate that Augustus Tyler moved to Platteville and rented his hotel and farm to a Mr. Van Vleck, who struck a rich lead deposit. The following was published in the Galena Gazette*:

Mr. Van Vleck, the present proprietor of the Tyler House, beyond Hazel Green, recently struck a rich lead of mineral within a few rods of his house. He thinks he will soon be able to take out from 2,000 to 4,000 per day. The ground belongs to Mr. Tyler, of the Union house, at Platteville, who receives one-sixth of the mineral as ground rent. The remaining five-sixths will probably make Mr. Van Vleck as wealthy as it is necessary for any man to be.

The Platteville Witness** reported later that month that Augustus Tyler sold his house and farm to a mining company and a large scale mining enterprise was planned.

Later proprietors of the Tyler House included Joseph Atkinson and Tom Wilcox. Wilcox made it in the newspapers for competing in pigeon shooting contests. These competitions were serious business with prizes and large crowds. In April 1877, the Hazel Green correspondent to the Galena Daily Gazette called Wilcox “a young disciple, but a dead shot.”

During its lifetime, the Tyler House provided lodging, dining, and entertainment. In July 1877, there was a “grand reaper trial” at the Tyler House farm. Several hundred people turned out to watch two pieces of farm machinery--a McCormick and a Woods self-binder--compete.  (The McCormick won.)

Tom Wilcox also threw popular balls to celebrate George Washington's birthday. The following is a description of the 1876 event as described in the Galena Daily Gazette:

The Tyler House, two miles north of here, was the scene of a merry party on Thursday the 22d, which was an entire and surprising success. Messrs. Breen and Wilcox furnished the music, which was excellent, giving entire satisfaction to all present. Prompting was well done by Mr. Cullen, assisted by Mr. Smitheram. Near 12 o’clock the dancers repaired to the spacious dining hall, where their eyes beheld a feast of good things, but in about fifteen minutes things didn’t look as they did at first. The Hall was appropriately decorated, and many of the dancers were becomingly arrayed for the occasion. Numerous spectators were present—so many that the dancers were often hard up for room wherein to hump themselves aright. The participants in the dance were a motley and pleasing throng. Withal they danced becomingly, danced energetically, danced well; in fact we left them on the floor footing it away as deftly as anything.