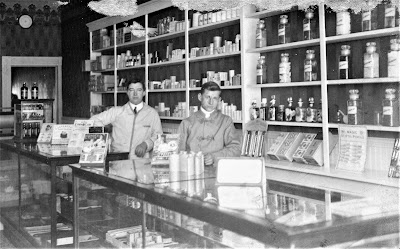 The Barker Bros. Drug Co. opened in Cuba City in the spring of 1914 and operated until at least the summer of 1917. The drugstore was located on Main Street in the southernmost part of the Junque Stops Here building, beside Nick's Cafe.

According to the publication The Northwestern Druggist, Barker Bros. carried "a complete line of drugs, stationery, rubber goods, perfumes, toilet articles and everything to be found in an up-to-date drug store." They also added "a fine new soda fountain" that was ready for the store's formal opening on May 9, 1914.

Robert Barker, a pharmacy clerk from Sparta, Wisconsin, moved to Cuba City in February 1913. He was only 20 years old when he opened his own drugstore the following year.

It appears that Robert had two brothers in Cuba City at this time--George and Edward--who may have had a role in the store, as well. None of the brothers were pharmacists, so Stanley M. Sorley was hired to handle the prescriptions.

The Barker brothers did not stay in Cuba City long.  Robert moved to Montana and Edward back to Sparta. George, who was the superintendent at the zinc separating plant in Cuba City, went on to become a well-respected professor,  researcher, and inventor at the University of Wisconsin.