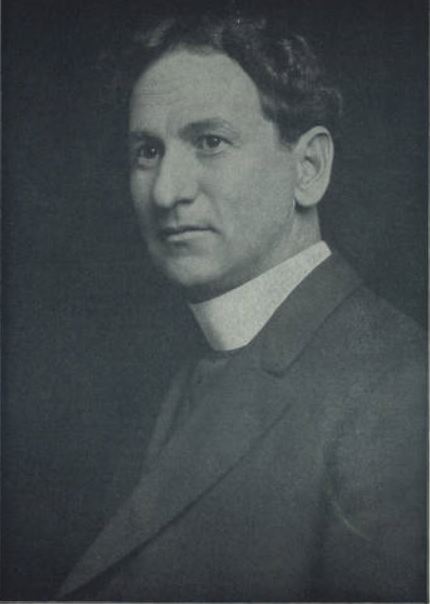 Lawrence J. Vaughan was a celebrated lecturer, poet, and playwright in the early years of the twentieth century. Thousands turned out to hear him speak at engagements across the country, and he rubbed shoulders with the best and brightest orators of his time. Why mention him here? Vaughan also happened to be Cuba City’s first resident Catholic priest.

Lawrence James Vaughan was born in Fond du Lac, Wisconsin, in 1863 or 1864, depending on the source, but he grew up in Newark, New Jersey. Vaughan’s first brush with fame occurred as a young man when his talent and interest in the theater led to a professional acting career. 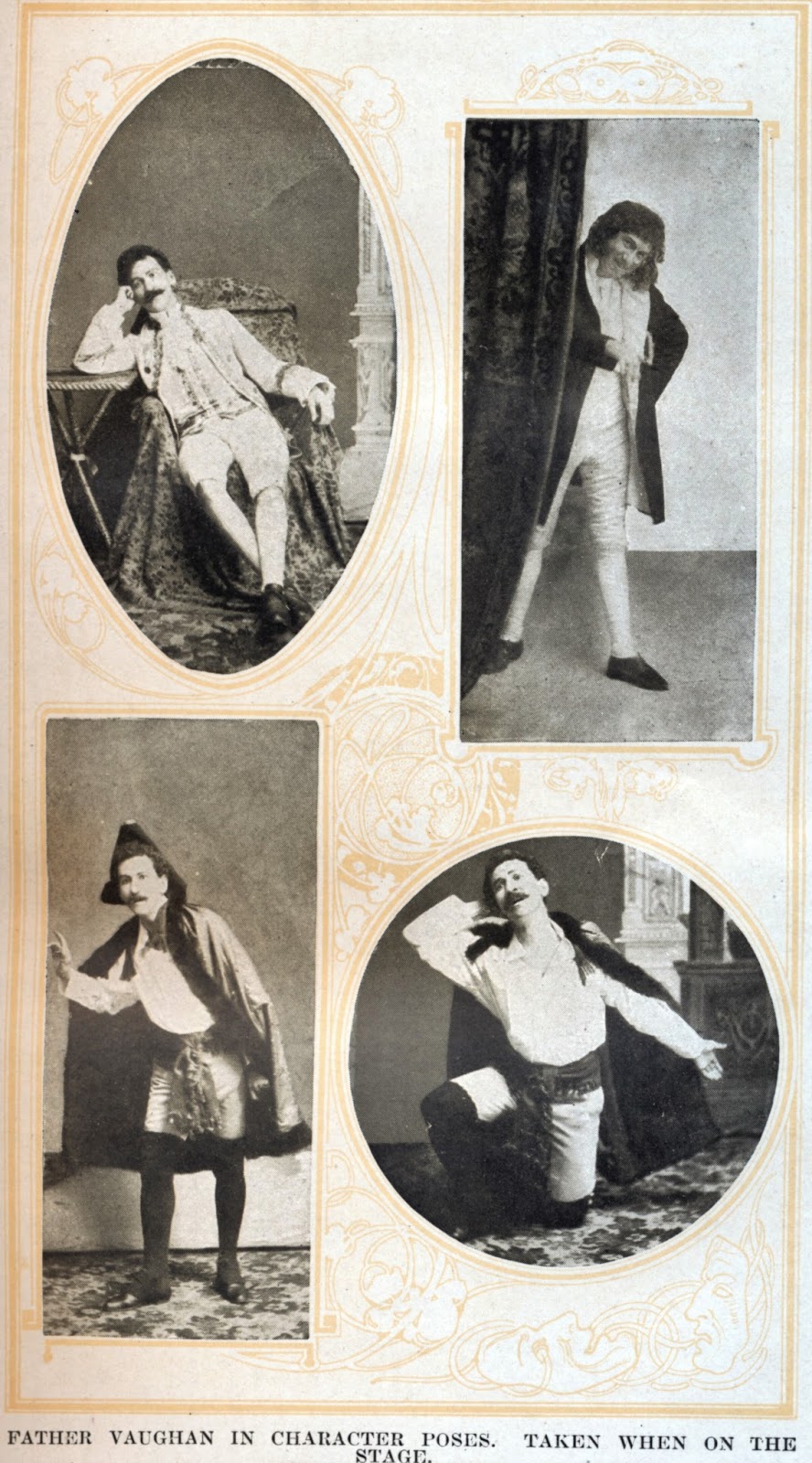 As a young man, Lawrence Vaughan performed with several theater companies throughout the Northeast.

Though he possessed a great deal of talent, the thrill of a life on the stage faded and Lawrence Vaughan sought a more fulfilling occupation. He returned to Wisconsin and pursued the priesthood, becoming ordained at the turn of the century and joining the Diocese of La Crosse. Father Vaughan began his life as a priest with assignments in Eau Claire, Loreto (Sauk County), and Altoona.

Vaughan’s writing and speaking skills were evident from the start and he was soon in demand as a lecturer. He spoke on many topics, but three of his most performed lectures were titled The Power of Love, Sermons from Shakespeare, and Is Life Worth Living? L. J. Vaughan’s fame took him to stages across the country, and he had managers to arrange and promote his busy lecture schedule. Some newspapers complained of the difficulty of booking him in their communities. His biography claimed that the priest initially secured $40-50 an evening, but later in his career, was commanding $250 for some appearances, which would be over $6,000 today.

Father Vaughan lectured locally in Galena and Dubuque. This advertisement in the Telegraph Herald announces a Dubuque performance.

Father Vaughan often appeared at the same events as William Jennings Bryan, famous orator, Congressman, three-time presidential candidate, and eventual Secretary of State. Some journalists could not help but compare the two and often found Vaughan the superior speaker. Those writing of Father Vaughan’s performances were blown away and describe him as a masterful performer with a magnetic personality. He was a skilled storyteller and his audiences found his delivery magical. 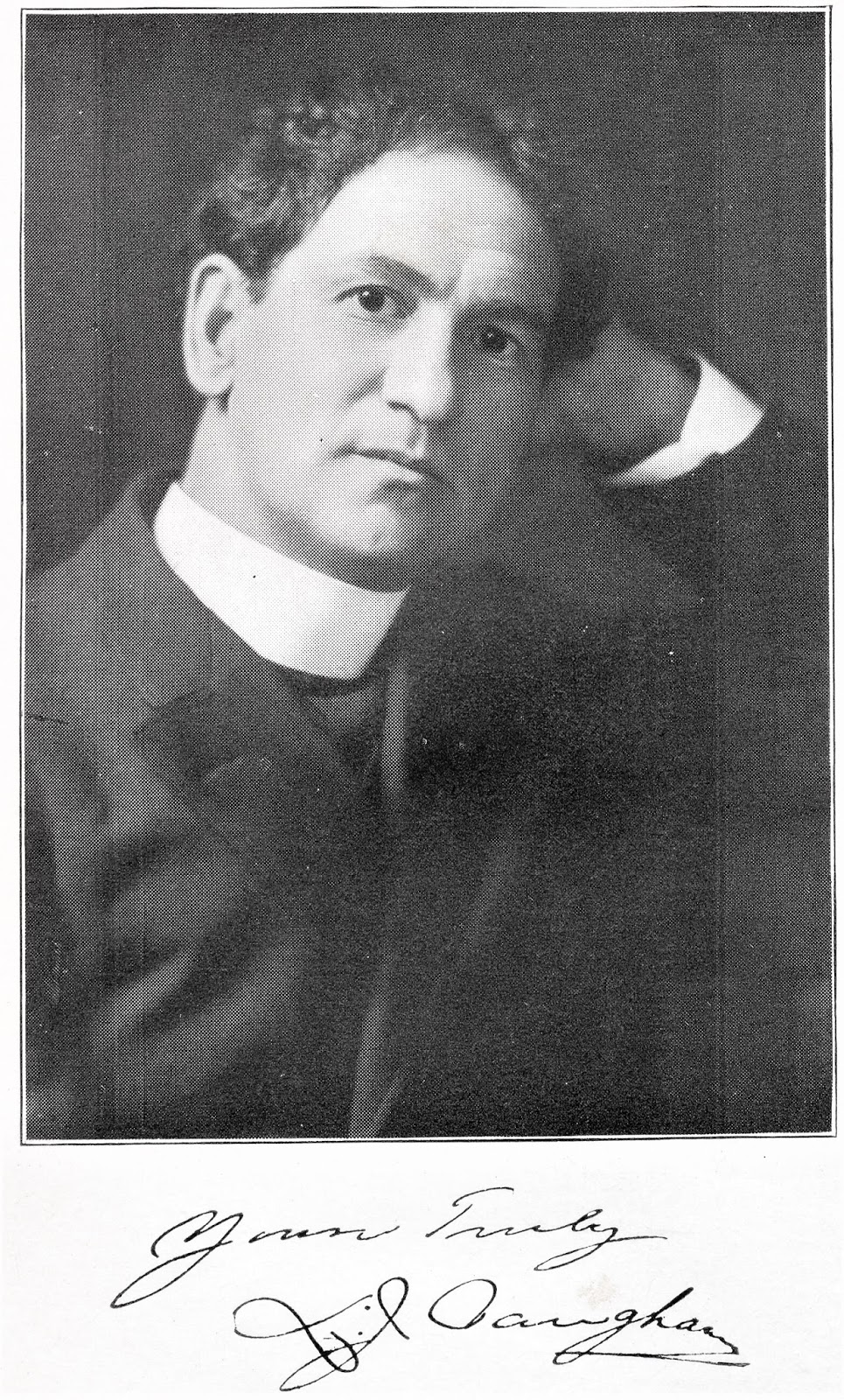 Though he clearly enjoyed sharing his message with crowds across the nation, the priest-lecturer had another, more meaningful purpose for taking to the stage. Since his time as an actor, he was interested in rescuing young people from lives of poverty and sin and providing them with guidance and education. The income from his engagements was largely devoted to these pursuits. While a priest in Altoona, Wisconsin, Vaughan founded and operated the Altoona Institute, a school for boys and girls, with his own earnings. The children Father Vaughan saved were a matter of great pride to him, and he enjoyed telling stories of their successes.

After a whirlwind several years, by 1907, there were signs that Father Vaughan’s hectic schedule may have taken its toll and, according to his biography, his health was suffering. Though it was meant, at least in part, to be a time of recuperation, this period of his career did not appear to be terribly restful. The priest relocated to Janesville, Wisconsin, with the intent to write, lecture, open another school, and assist his good friend, Rev. W.A. Goebel, with his growing parish.

Father Vaughan also never lost his love of all things dramatic. He was reportedly working on an opera in the fall of 1908 and his play, A Woman of the West, was performed for the first time in Chicago. The drama, set in a mining camp, toured the Midwest and became perhaps best known for a controversial scene in which parts of a Catholic Mass were performed on stage. Several members of the Church found the detailed portrayal of a Mass irreverent, and one of the harshest critics was Vaughan’s own bishop, Bishop Schwebach of La Crosse.

An advertisement from the Telegraph Herald announcing the performance of Father Vaughan's play at the Grand Opera House in Dubuque on October 3, 1908.

It is at this point in Father Vaughan’s career that he becomes a part of Cuba City history. On November 16, 1908, the Dubuque Telegraph Herald announced that Vaughan would be returning to the duties of a parish priest by taking over at St. Rose in Cuba City. While the parish had existed for decades before, and even built a new church in 1895, St. Rose had never had a priest of its own. It was a mission church of St. Patrick’s in Benton and relied on this priest visiting weekly for Mass. The assignment seemed a curious one for such a celebrity as L. J. Vaughan. 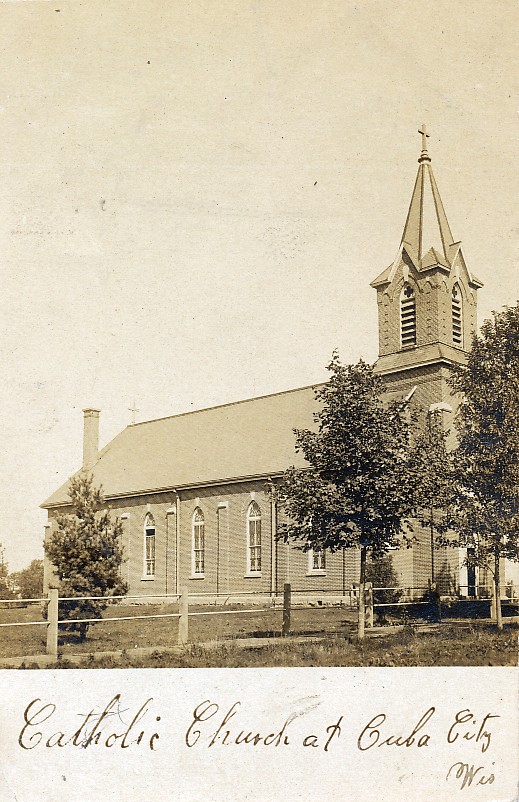 St. Rose Catholic Church in Cuba City, as it looked when the Rev. L. J. Vaughan served the parish.

According to his biography, Father Vaughan’s health was poor at the time of his arrival at St. Rose and continued to deteriorate as he went about his priestly duties. Vaughan had only been in the parish a few months when Cuba City physicians insisted he enter the hospital. A surgery performed at Mercy Hospital in Dubuque in late April found gallstones and “stomach weakness” to be the cause of Vaughan’s ill health and doctors were confident in his recovery. Sadly, the prayers and well wishes he received were not enough to nurse the priest back to health. A stomach hemorrhage occurred in the weeks following the surgery, resulting in his death on May 10, 1909.

The loss of the dynamic priest was a shock to those who knew and loved him, and a series of memorials were planned in his honor. Father Vaughan’s remains lay in state at St. Raphael’s in Dubuque on the evening of his death. Early the next morning, an entourage from St. Rose parish arrived to escort the body to Cuba City. The hearse was met in that town by more people, as well as the Cuba City Military Band, which marched in front of the procession, playing a funeral dirge on the way to St. Rose Catholic Church, where Father Vaughan’s body lay in state throughout the day and evening. 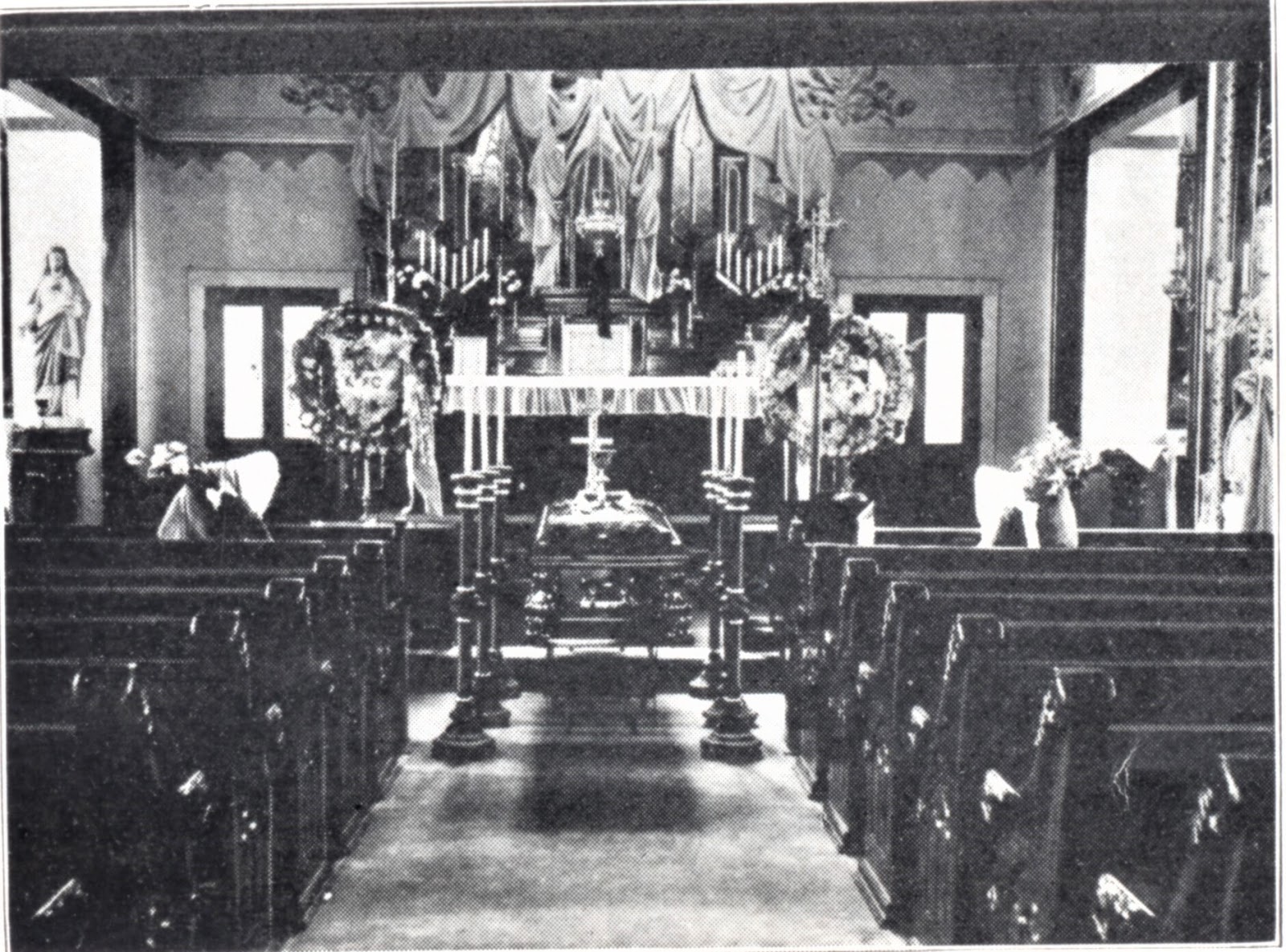 Though he had only served the parish for a few months, the Telegraph Herald reported that the loss was strongly felt:

“The entire countryside about Cuba City is in grief over the passing of the brilliant young priest whose fatherly care during his time in the community had meant so much to the people. In large delegations they visited the church not once but many times during the day paying their silent tributes of tears and flowers, mingled with deep and sincere love and grief to the memory of a man who came amongst them to share with them their joys and their sorrows to be a priest and a friend and to give into their lives lessons of the deepest and truest Christianity.”

On Wednesday, May 12, the mourning in Cuba City continued. Businesses in town were closed and schools were dismissed. Father Vaughan’s funeral Mass took place in the morning, with eleven priests in attendance, and parishioners had one last chance to process by the casket. According to the Telegraph Herald, at this point, Father Vaughan's body was escorted down Main Street by "the little girls of the parish, the altar boys, the Knights of Columbus, Daughters of Isabella and Catholic Knights." The procession ended at the train depot, where many parishioners accompanied Father Vaughan's body on the train to Janesville, where he was to be buried in Mt. Olivet Cemetery the next morning. 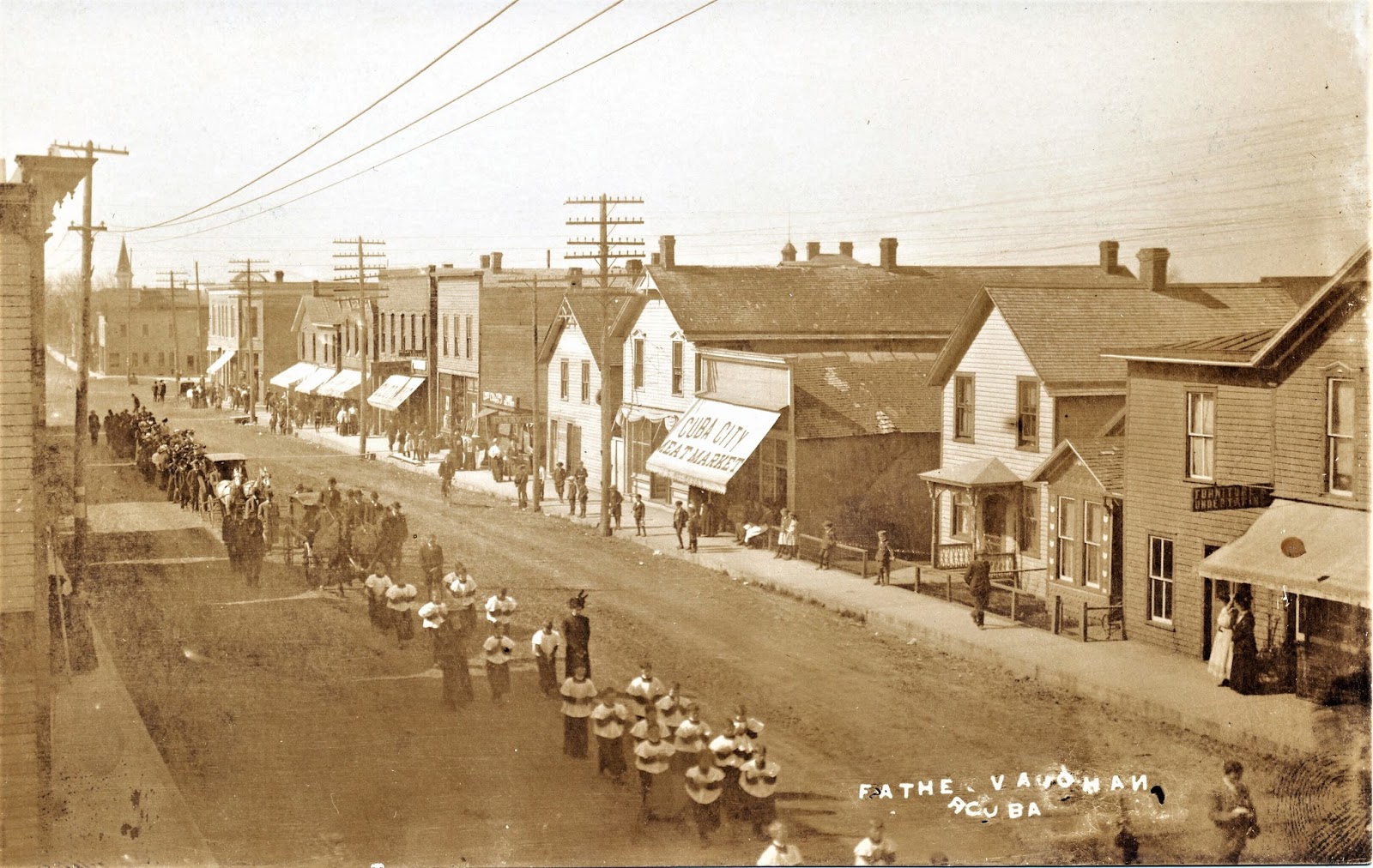 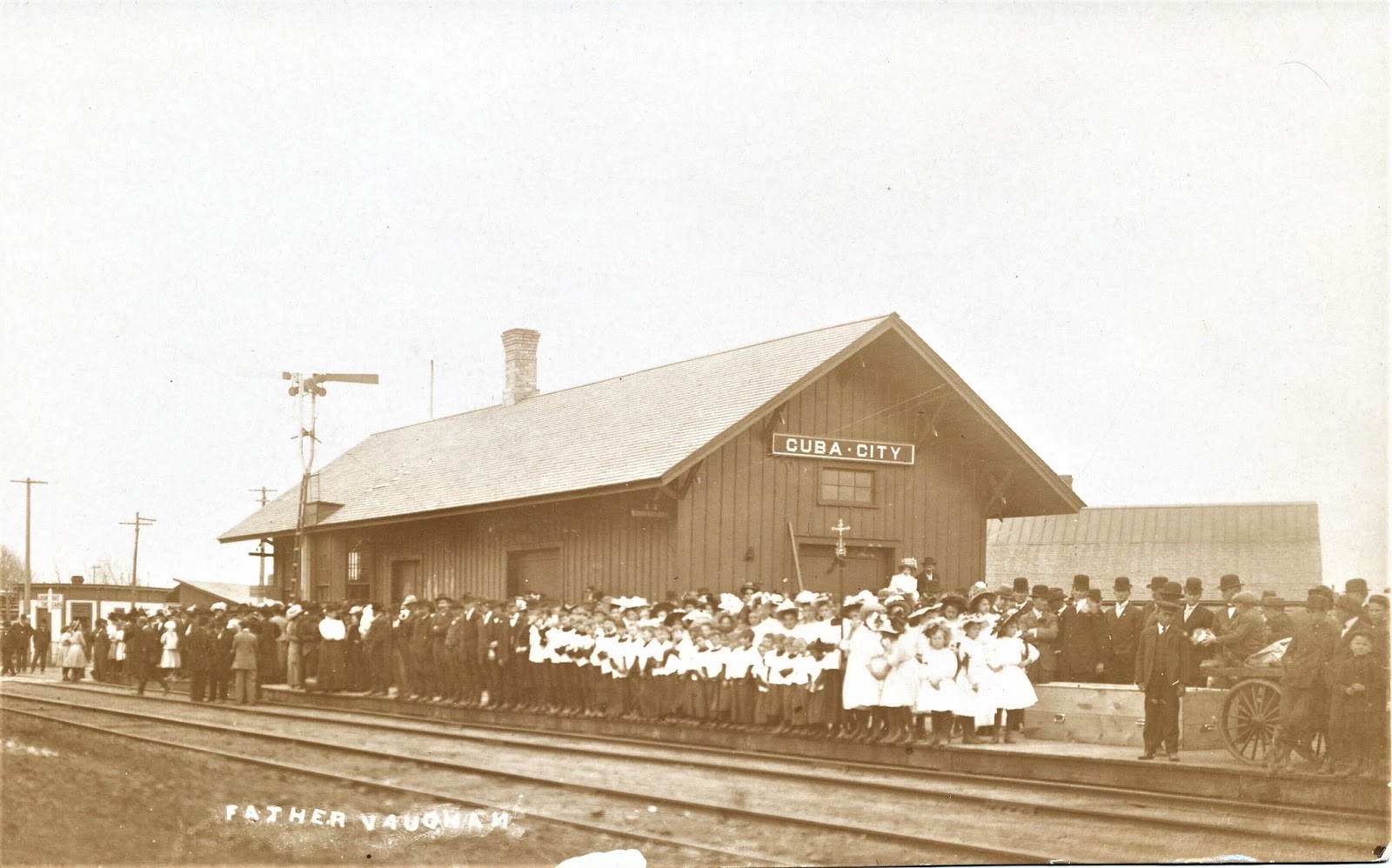 Father Vaughan’s time in Cuba City was brief, but he made many friends and had a particularly close connection with two Cuba City residents. Businessman John C. Donohoo, of Donohoo, Splinter, & Co., was the executor of Vaughan’s will and would find himself embroiled in court cases as the will was contested at least twice in the years following Vaughan’s death.

In 1910, Father Vaughan’s sister, Johanna True, unsuccessfully attempted to break the will in the Grant County courts. In 1911-1912, acquaintances of the priest argued that Vaughan promised them $1,000 for the meals, lodging, and financial assistance they provided while he was studying for the priesthood. This argument was appealed all the way to the Wisconsin Supreme Court. Lawrence J. Vaughan’s estate was reportedly worth $20,000, which would be over $505,000 today.

The second Cuba City resident with a close connection to Father Vaughan was Charles H. Bartlett. It seems that Bartlett arrived here with the priest at the time of his assignment to St. Rose parish. He served as Vaughan’s private secretary and agent, though he was only in his early twenties. After Vaughan’s death, C.H. Bartlett stayed in Cuba City and would go on to become involved in all sorts of businesses, including real estate and undertaking. He also had a hand in the Cuba City Motor Company and the telephone company.


L. J. Vaughan willed the rights to all of his works to his young secretary, and C.H. Bartlett formed, with two other men, the Vaughan Publishing Company, which commenced publishing the priest’s biography, lectures, and other works. The printed lectures were advertised in newspapers and magazines across the country, ensuring that Father Vaughan’s words would live on after his death.

An advertisement for The Life and Works of Father Vaughan, published by the Vaughan Publishing Company. 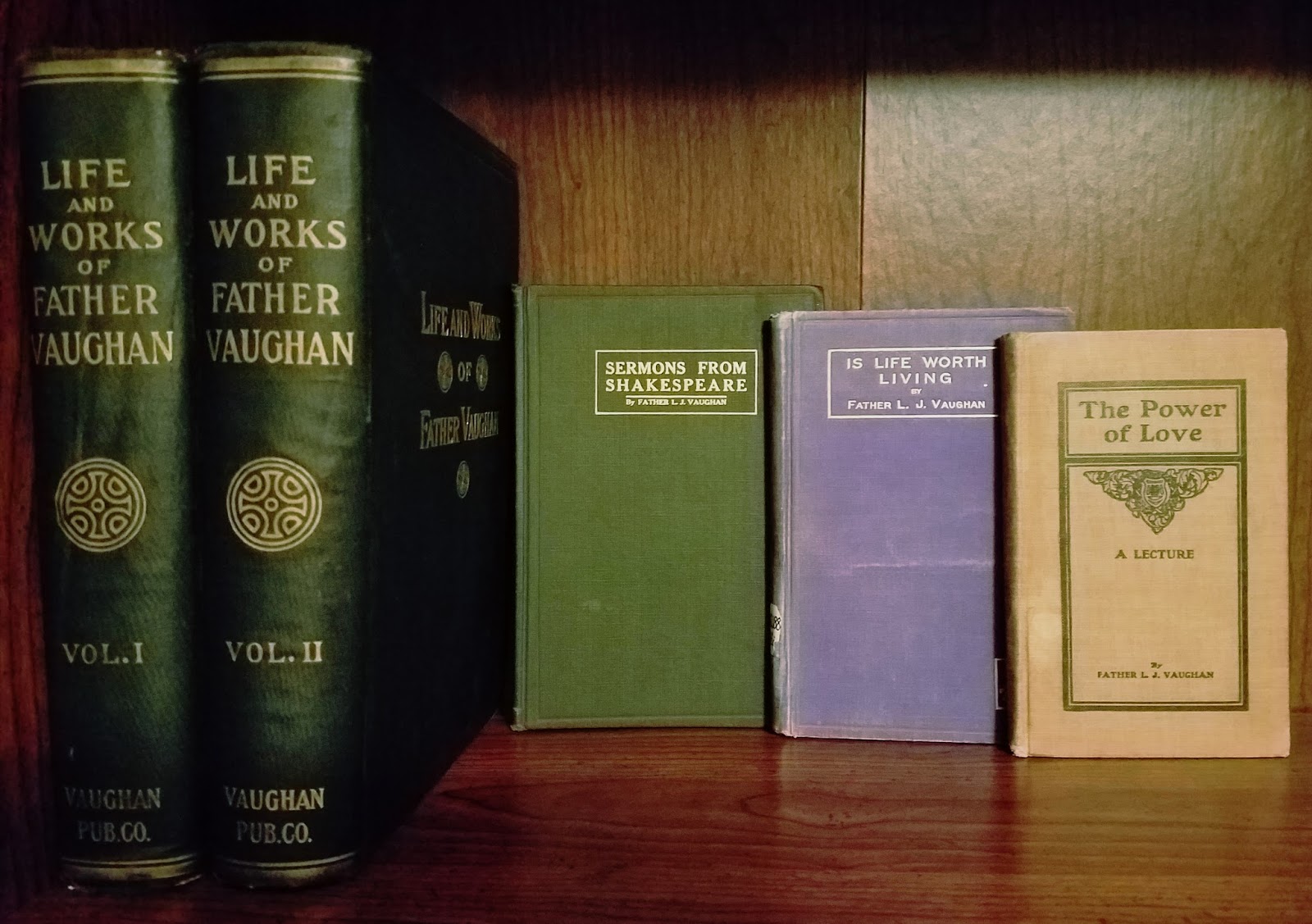 Links to more information on Lawrence J. Vaughan may be found below. These sources, along with numerous newspaper articles from across the country, and especially from publications in Eau Claire, La Crosse, Janesville, and Dubuque, were most helpful in my research. A special thank you to Julie Hineman, Tri-Parish Secretary of Holy Family, St. Boniface, and St. Patrick, for confirming Father Vaughan’s assignment in Loreto.

Life and Works of Father Vaughan. Volumes 1 and 2. Published by the Vaughan Publishing Company.

“Father Vaughan : An Appreciation.” Written by Louis J. Alber for The Lyceumite and Talent, June 1909.