"So neat and pretty" 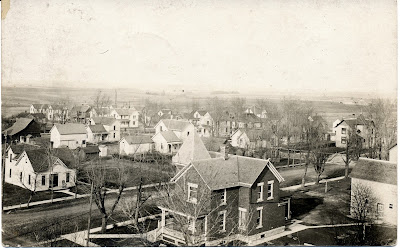 This postcard was sent in March 1916 by a woman named Ruby after she visited Cuba City. Ruby writes:

"Went to Cuba City for a few days. This is a picture of a part of the town. It is a small place but it is so neat and pretty."

The photo is an aerial view of the corner of North Madison Street and Lafayette Street, facing northeast. The brick home belonged to George and Theresa Vosberg and was built around 1908. The first portions of Main Street were paved in 1915, and evidence of this work continuing can be seen behind the Vosberg house.
Email Post
Labels: 1910s Dwellings