Cuba City's centennial history, written in 1975, has a short paragraph on the Cuba City Creamery:

"According to the 'oldest residents' the first creamery here was started by R. A. Wilson & Co. in the early '90s. It was later leased to the Elgin Creamery Co. and later changed hands a number of times, with a Mr. Chandler and Fred Maso operating it in turn before Henry Ipsen took it over in 1919. He operated it until retiring and it has since been carried on by his sons, Hank and Paul."

A quick Google search turns up some old directories and reports, like this one from the Wisconsin Dairy and Food Commission in 1905. It lists the Cuba City Creamery's manager at the time, R. B. Lucky, and records the names of local dairy farmers using the creamery. 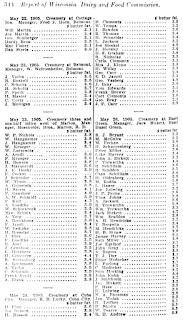