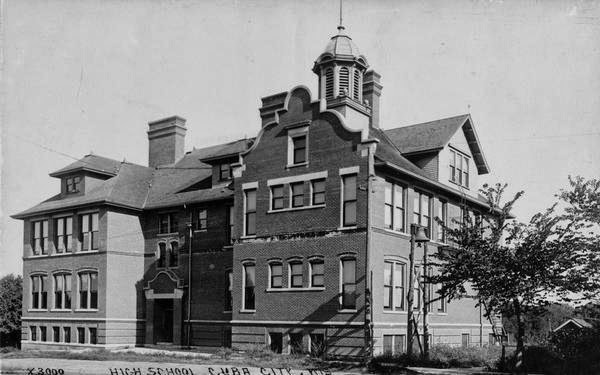 On Monday, March 11, 1918, a fire broke out at Cuba City's public school, resulting in the evacuation of students and substantial damage to the building. Dubuque's Telegraph Herald reported that the grade school and high school students were preparing to leave for lunch when smoke started pouring out of the furnace grates. All inside the building made it to safety and some even managed to rescue a piano from the first floor before the flames reached it. The fire apparently began in the basement and may have been the result of a defective flue. The Cuba City Fire Department arrived at the scene but, despite their efforts, the school was, in the words of the Telegraph Herald, "doomed." The newspaper painted the following eerie picture of the disaster:

"Valiant attempts to check the fire proved futile. The walls, blackened and scarred, are all of the ill-fated building that remains. Near nightfall the ruins were still smoldering."

An article in the Cuba City News Herald a few days later stated that the damage was not as complete as originally thought, and losses were confined to the old part of the building. This must have been a relief since the new addition was added just three years earlier.

In the days following the fire, some fun notices could be found in the Cuba City News Herald:

"We desire to express our thanks to the ladies who so kindly furnished us lunch at the schoolhouse fire recently. It was greatly appreciated. C.C.F.D."

"Will the person who by mistake took the little clock from the basement of the high school building the day of the fire kindly return same? Thank you. John Riege"