In 1934, a band shell was built in Cuba City's city park (now Veterans' Memorial Park). The park was also home to an earlier concrete block bandstand, built in 1891. The newly built band shell, which can be seen on the right in the photograph below, had a stage platform in front of it and soon became the site of numerous concerts and other civic events. It was funded by the Civil Works Administration (CWA), a federal relief program that was part of President Franklin D. Roosevelt's New Deal. 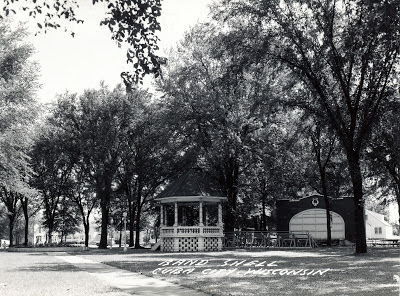 The new "civic outdoor theatre and band shell," as the Telegraph Herald described it, was dedicated on a Saturday evening, July 14, 1934. This event was also a celebration of the Cuba City Military Band's 50th anniversary. Several thousand people attended. Visiting dignitaries spoke and the Cuba City band, Hazel Green band, and Dubuque Cadet band each gave a concert.

In 1968, Cuba City residents voted against repairing the band shell at a cost of about $3,000 and overwhelmingly voted to tear down the structure when it was no longer useful.