During World War I, Americans were asked to make sacrifices on the home front. The federal government issued several rules and restrictions during this time, and one of those affected the use of fuel. The following notice in the Cuba City News Herald describes what residents could expect after the restrictions were in place:

For the next nine weeks stores will be obliged to close Monday, except where food is sold they may remain open until noon. During the rest of the week days they may remain open. Theaters, moving picture houses, billiard rooms and bowling alleys may keep open on Mondays but must close Tuesdays instead.

During the time stores are open on Monday forenoons, nothing can be purchased except foods. Don’t ask for other goods as merchants are not allowed to sell them.
--Cuba City News Herald (January 25, 1918)

Store owner Dillon Donohoo advertised how his store would be making adjustments in light of the new laws (click on the image for a larger version): 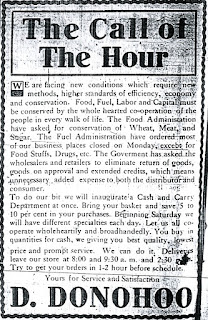