Before the definite path of the railroad was determined, several area settlements vied for the honor and certain economic boost that frequent rail traffic would bring. One of those places was Georgetown, located just northwest of Cuba City. In the mid-to-late 1800s, Georgetown was a flourishing community with several businesses and residents.


One of Georgetown's businesses was a general store owned by James Jeffrey. Jeffrey was born in England in 1841 and came to America with his parents in 1847. I don't have exact years for Jeffrey's store operation in Georgetown, but he was definitely in business from 1880-1900, based on census information. I believe his store was located at the intersection of what is today County Road D and St. Rose Road. 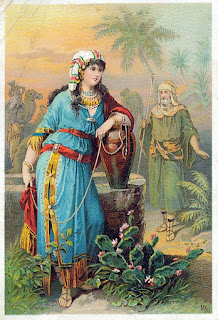 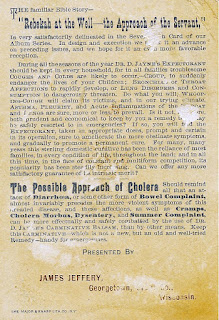 Above is a trading card from the James Jeffrey store in Georgetown. It is advertising Dr. D. Jayne's Expectorant.

When the railroad tracks were built through Cuba City, Georgetown's fate was sealed. Its population dwindled and businesses closed or moved to more lucrative locations, leaving Georgetown a small, peaceful farming community.