The current location of Doolittle's Pub & Eatery on Main Street has a long history as a tavern. Before opening Kellner's Hardware Store, Christopher Kellner ran a tavern at this spot in 1884. He sold the property in 1886. George and Joseph Splinter were later owners of what they called the Splinter & Splinter tavern.

George Wiederhold came to Cuba City (from Dickeyville) in 1898 and bought George Splinter's half interest in the bar, making it Splinter & Wiederhold. In 1910, Wiederhold bought Joseph Splinter's share and ran the Wiederhold Tavern until his death in 1930. The tavern remained in the family and was run by George's son, Sylvester, also known as "Whitey." (Dates are courtesy of the Cuba City Centennial Book.)

Below is a drink token used at Wiederhold's Tavern:

George Wiederhold and wife, Julia (Holt) Wiederhold on their wedding day, May 13, 1902: 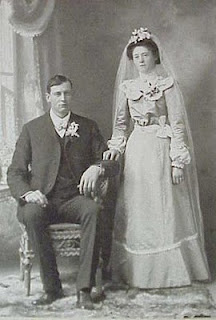