I received an email today from the descendant of one of Cuba City's prominent citizens of the past, Elias Austin Gillham. Gillham was Cuba City's first marshal after its incorporation as a village in October 1891. The Cuba City Centennial book (written in 1975) describes the work of the early Village Marshals:

"The Village Marshal was not the least of the municipal employees. Up until World War II, he did everything including shooting stray dogs as well as trying to insure domestic tranquility by mediating Maw and Paw spats and cooling off the now obstreperous drunk. He stoked the pot belly stove in the town hall and the furnace before the days of automatic oil burners and he mowed the grass in the park and tidied up the bandstand, in his spare time he might cut patches of weeds here and there on street corners and fill in the potholes in the roadway. If he worked more than a standard 8 hour day, that was all right too. He was not paid by the hour. When the Miracle of Detroit began to fill the streets with automobiles he was criticized for letting them dang speeders whiz around when the village fathers would not even buy him a horse for chasing them. All this and more he did without much pay, no Social Security promise and no tenure. After 100 years, it seems hard to imagine that this little village would have functioned and flourished without his services and it is fitting and proper he be paid this tribute in the centennial year."

The following was written about E.A. Gillham in the Centennial book:

"E.A. Gilham. An early resident. He was a house mover in a day when buildings were moved with a capstan, ropes and pulleys and horse power. He moved the old St. Rose Church from St. Rose Cemetery to its site on Clay Street using that method." [Unfortunately, the church is no longer standing.]

Below is a picture of Gillham from the Centennial book: 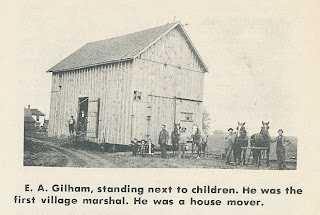