The Whithams' Junction House in Elmo

The Junction House, a nineteenth-century stage coach stop, stood just a few miles north of Cuba City, in the area that would eventually be known as Elmo. The hotel was an important stopping place because it was located at the “junction” of the Galena, Mineral Point, and Platteville roads, and passengers could transfer coaches at this point, depending on their destination. 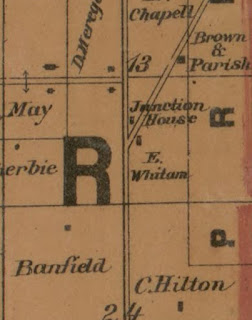 The Junction House is visible in this map of the Elmo area from 1868. The "New Map of Grant County" was made available by the Library of Congress, Geography and Map Division.

The inn was built by Emanuel Whitham in 1854 and was described as “a huge frame structure” in the 1881 history of Grant County. Whitham and his family came to the United States from West Yorkshire, England, settling in Pennsylvania for several years before moving to Wisconsin.

By 1870, the elder Whitham had moved to Galena, and his son, Emanuel Whitham, Jr. was running the inn. The following excerpt from the Galena Daily Gazette (Feb. 1, 1876) gives a colorful description of the inn and its proprietor:

“The hotel here is an old institution, having been here in days of yore, and well and favorably known as the Junction House, and now kept by Emanuel Whitham, Jr., more commonly addressed as “Bub,” who is ever and anon ready to satiate the appetite and quench your thirst with any or all the beverages he has on hand; and should you be the owner of a refractory or unmanageable equine Bub will go for you and give you a good trade, having your interest second only to his. He can beat any man in the county pitching horse shoes, tossing coppers and cracking bon mots, and can do it without digressing the code of morals.”

By the mid-1870s, news that the railroad would be traveling through Elmo caused quite a stir. In the summer of 1875, a railroad depot was built near the Whitham’s hotel and the small community would soon see a store, post office, and harness and blacksmith shop.

Map excerpt from the 1877 Atlas of Grant County.

“Bub” Whitman, enterprising young man that he was, had a survey done for a village site, and acquired 40 acres, laying off 200 lots that he would enthusiastically try to sell. In 1876, advertisements were placed in newspapers to entice people to purchase lots in the “promising young village.” 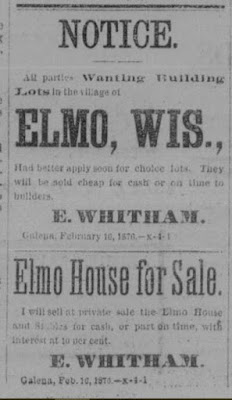 Interestingly, Whitham also put his stables and hotel, now officially called the “Elmo House,” up for sale at this time. By May 1877, he had sold the hotel that had been in his family for over 20 years to D. J. Wright of Elk Grove. Though the inn had changed hands, Bub Whitham planned to stay engaged in business at Elmo and was drawing up plans for a new home that would likely be built on one of his lots.

Many members of the Whitham family stayed in the area and are buried in Elk Grove, not far from Elmo. 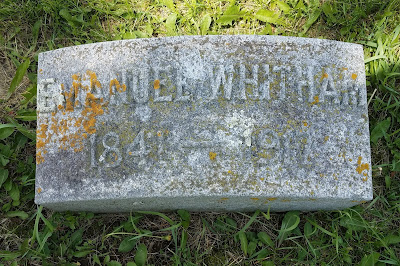 The Junction House still provides dining and entertainment today under its most recent name, the Elmo Club.