This tin egg carrier advertising Crescent Macaroni and Cracker Company (Davenport, Iowa) was found at a local auction. Most interesting is the stamp on the top of the carrier:


TO BRING
YOUR EGGS
TO 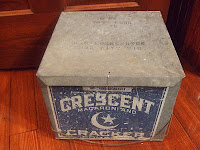 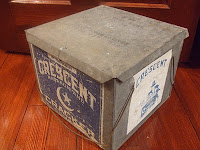 George Longendyke was born in Cedar Rapids, Iowa. He arrived in Cuba City around 1895. Longendyke worked initially at R. B. Luckey's Cash Store, located in the building now occupied by Gile Real Estate and Insurance. (Mrs. Luckey was George's aunt.)

He later had businesses of his own on Main Street, including a garage/vulcanizing plant and a grocery store. According to a newspaper article in the Telegraph Herald, Longendyke operated his grocery store from ca. 1923-1938.

Longendyke was also active in the community, volunteering in Cuba City's first fire company in 1905 and serving a term as village president from 1922-24. According to Cuba City's centennial history, he was once a circus performer and was remembered dressing in clown costume and makeup to entertain Cuba City residents at a local talent show.

George Longendyke passed away at the age of 70. His  death was reported in the Dubuque Telegraph Herald and can be read online, courtesy of Google News Archive.
Email Post
Labels: 1920s 1930s businesses Cuba City George Longendyke grocery stores photographs